You are here: Home / Grants and Investment / Stock Market for Dummies – The Basics

This Stock Market for Dummies article aims to clarify some basic notions related to the stock market, namely what it is and what role it plays in the economy and our lives. Finance and investment have always been perceived as areas which are particularly difficult to understand, mainly due to their knotty terminology and those computer screens full of numbers and charts.

The stock market, though complicated in relation to financial terms and trading operations, is, in essence, the embodiment of fundamental economic principles which are not hard to understand.

By the end of this article, you will have a better understanding of the principles and role of the stock market and, perhaps, you’ll never need another Stock Market for Dummies article ever again.

The Stock Market for Dummies – What is it?

The stock market is exactly that – the market where different people, companies, and institutions come together to buy and sell stock. Rather than a physically fixed location, the term stock market is used as a general reference to an extremely varied global network of transactions, which usually take place in different Stock Exchanges.

When companies enter the market (the goods and/or services market), their founders usually own 100% of the company. So, we would call such a company a privately-held company. If the company is innovative and successful in selling its goods or services, it will gain profit, calculated as the revenue from sales minus all company-related expenses (production costs, salaries, taxes, etc.).

If the market conditions are right (meaning that more people would potentially purchase goods and/or services from the company), then the company could consider expanding by opening new locations or diversifying its offer.

However, the profit alone is usually not enough to fund such an expansion, and the company has thus reached its maximum potential. To continue expanding and to make more money, companies can choose to sell a part of their company to an investor, namely to sell company shares.

Why do people and companies buy and sell shares?

The main reason behind trading shares is to capitalize a company’s value. Imagine you own a successful chocolate business and you wish to expand, but you don’t have money to do so. In such a situation, you can choose to sell a part of your company’s shares to an investor. You can then use the money you made selling the shares to fund your business expansion. 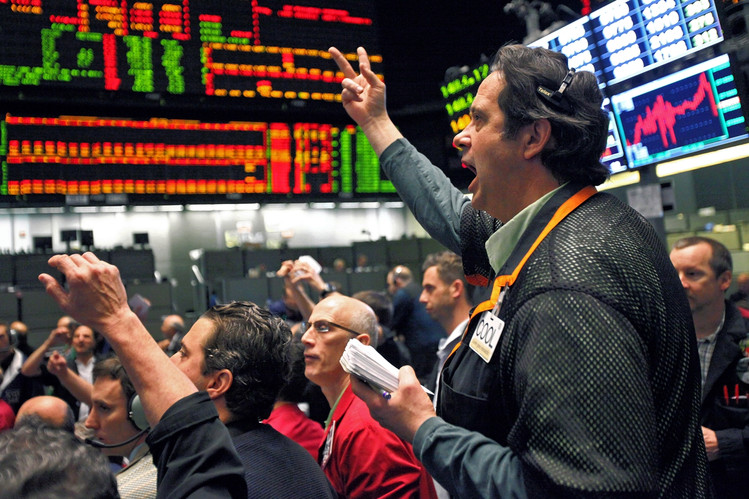 And here’s the fun part. If publicly traded, shares do not have a fixed value. Their value depends on the performance of the company and on how people perceive that company. So, if your company does well and has a good reputation, the price of its shares will go up. If your company does not perform well and/or has attracted negative public opinion, its share prices will go down.

Going back to your chocolate business, you have just opened 7 more locations which are doing great because they are in larger cities. The price of your company’s shares has grown, so you can now sell more shares for a lot more money than you initially did and also get larger dividends.

Trading on the Stock Market for Dummies

Large companies often choose to list their stock on the stock market, where share prices will float in accordance with the perceived market value of the company. When a company first starts to sell its shares publicly, it makes an IPO (Initial Public Offering). Facebook’s stock, for instance, was valued at its IPO at over $140 billion dollars, turning all its shareholders into millionaires overnight.

Trading shares on the stock market is a game of knowing when to buy and sell. Ideally, investors target promising companies whose shares have a good chance of becoming more expensive. Then, they buy those shares and sell them for a profit when the price goes up. Share prices are also influenced by the market’s perceptions, alongside real company performance. When large discrepancies occur between the two, there is a chance that a bubble might appear.

When trading on the stock market, it’s important to remember the difference between perception and reality. For instance, a company performing badly at some point will see its shares plummet. You, the shareholder, might choose to sell as soon as possible, to avoid losing more money. However, this can be a rash decision, as many shares actually rebound as soon as market perception changes. If anything, perhaps it’s wiser to buy shares when their prices go down, and then wait for a price recovery for a larger profit.

The stock market is a vital and integral part of the modern economy. Companies sell shares for money, which they then invest in business development, which creates jobs, purchasing power, prosperity, and reinvestment. In fact, the spectacular overall economic development we’ve seen in the last century would not have been possible without the stock market.

Basically, the stock market allows companies to capitalize not just on their profit as goods and services providers, but also on their perceived value on the market. It also allows more people to benefit from profits that companies make. In addition, public ownership of companies puts more pressure on managers to perform well and deliver efficiency and profits.

The stock market, however, has not always been a place of happy events.

Woe to the Vanquished – Bubbles and Their Consequences

The stock market can be highly beneficial to the economy when all goes well. But it can also cause catastrophic damage when things go wrong.

Share prices freely float on the market and are meant to reflect the real market value of companies. However, due to the logistical impossibility of constantly assessing this at every turn, share prices are also based on speculation and the perceived image of what is valuable.

Companies sometimes do not have the potential to meet market demands. This happens due to internal or external reasons. However, they trade shares at very high prices, and the perceived value prevents investors from coming to grips with reality. Eventually, share prices begin to drop, with drastic consequences for the entire economy. Millions of dollars can disappear virtually overnight, and can cause a business to fail.  This, in turn, generates unemployment, low consumption, and poverty.

The situation becomes even more severe when financial institutions encourage unrealistic prices for goods and services by offering loans which are beyond the debtor’s real payment capacity. This is what happened in 2008 when the government was eventually forced to bail out financial institutions with taxpayer money in order to prevent a complete collapse of the financial system.

The stock market is vital to our everyday prosperity, as it’s a major way in which companies make money. By selling shares, companies can expand and grow, which creates jobs and prosperity. However, one should never forget that shares are intended to reflect a company’s real value on the market. Reckless speculation and the urge for quickly becoming rich can lead to chaos. We hope that our Stock Market for Dummies guide has made things clearer and we look forward to seeing you trade.