Looking for the cheapest cell phone plans out there? Tired of paying preposterous cell phone bills? Then you’ve come to the right place. In this article, we will present a number of alternatives to the ridiculously expensive cellphone services of big carriers.

The main carriers in the US, Verizon, AT&T, and T-Mobile among them, have very high cell phone monthly prices, with some packages surpassing the incredible sum of $120. Even the cheapest unlimited cell phone plans from major carriers still entail major costs. Imagine how much this would cost your entire family, should everyone have a phone. And we’re not even going to get started on international costs. If left unchecked, the cost of using your phones can go through the roof and reach unsustainable levels.

Before you pack your bags for Canada or switch back to a land line, you should know that the search for the cheapest cell phone plans has moved towards a number of smaller carriers, who provide affordable rates and attractive monthly plans. The basic idea used by these carriers is to minimize costs while maintaining the same service level of quality, as much as possible.


However, despite some really good offers presented by smaller mobile carriers, not all their services can match the resources and expertise of a big carrier. Thus, you should carefully consider pros and cons before you decide to switch carriers, despite the obvious price difference.

Let’s take a look at some of the best alternative cellphone service providers, and see how they fare in the race to providing the cheapest cell phone plans in the US. Without prepaid accounts, most of these carriers will simply allow you to pay what you use. 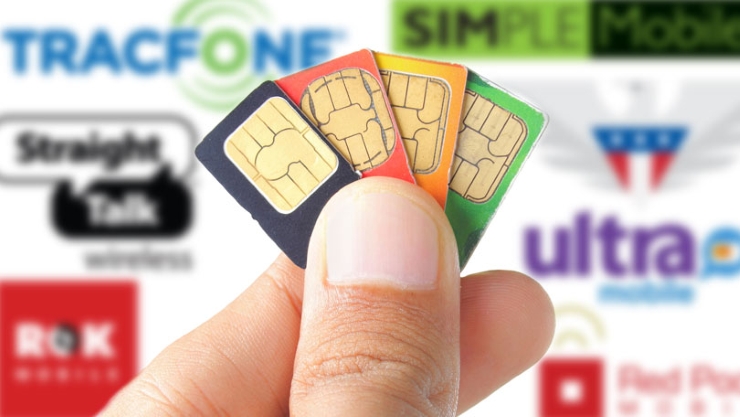 Ting has highly flexible individual pricing options, with an average monthly bill somewhere around $26. The provider stands out from other companies because it only charges clients for what they actually use. As such, you can keep data usage and minutes at a minimum during vacation months, and you’ll be charged as per the lowest pricing tier. During intense working months, an increased phone usage will transfer your monthly subscription to a different price category.

Ting is a smart option for users looking for inexpensive cell phone plans without the hassle of contracts and commitments. In addition, you can also use your own smartphones and don’t have to buy new ones.

This cellphone services provider is dedicated mostly to seniors and offers no-commitment plans which can start at $10 a month. Any extra use of mobile data or minutes/text messages is billed separately. Consumer Cellular uses the AT&T mobile network, so it will consequently share any poor coverage issues AT&T has. The average monthly plan has been calculated at around $50 a month.

Cricket Wireless is one of the most popular low-cost cellphone service provider in the US. The company offers unlimited minutes and text at around $25 a month, with a $10 increase for mobile data services. Subscribing to an automatic payment plan can save you an extra $5 a month. Unfortunately, Cricket Wireless also uses the AT&T network and is thus subject to its dead areas and other issues (which are not that bad). However, you will be able to use your own smartphone, which is great. Overall, this is one of the most reasonable low-cost carriers, in terms of both price and quality. Check out more deals from Cricket here.

FreedomPoP offers one of the cheapest cell phone plans out there, with unlimited talk, text and 500MB of data priced at less than $7 dollars a month. Despite cheaper plans than most cellphone carriers, there have been reports of poor network coverage and bad customer service. Use FereedomPop if you need a really cheap cell phone plan but try to check out other carriers if you would like more network functionality.

With decently cheap services, GoSmart mobile can be a good choice for people who don’t use the internet on their device all that much. The cheapest cell phone plans offered by GoSmart Mobile will give you unlimited text and talk, alongside 1GB of web data and a discount for additional use, at around $35 per month. However, if you’re an avid internet user on your mobile device, it would be better to consider a provider with cheaper mobile data.

GIV Mobile adds some feeling into the business by donating up to 8% of a customer’s monthly plan to a charity, which the customer is allowed to choose. This makes for a great case of cause marketing and has made the cellphone service provider very popular. In addition, the average monthly bill does not exceed $30 per month and includes unlimited talk, texting, and 4G internet. While not the top candidate for the cheapest cell phone plans, GIV Mobile certainly stands out through its cost-effectiveness and its dash of humanity, and will make for quite a deal.

This carrier provides discounted phone plans to its users by using Wi-Fi networks as much as possible. Its innovative feature is that it pays customers back unused data. This economical approach ensures that an average bill at Republic Wireless doesn’t normally exceed $25 per month. In addition, there is no contract to force you into a long-term commitment, which makes it perfect for kids. The main disadvantage of Republic Wireless is that you must purchase a new phone and may not bring your own. No iPhone for this one.

In a similar fashion to Republic Wireless, Scratch Wireless offers affordable monthly plans with virtually free Wi-Fi. Additional voice minutes and text messages will not push your average monthly bill further than $10. However, you’ll be forced to use the Scratch wireless phone. Yes, phone, singular. Only one kind. So, unless you’re that kind of person, think twice before dumping your favorite smartphone.

If you’re intent on changing your mobile services provider, and given the above alternative options, we may conclude that searching for the cheapest cell phone plans is not necessarily the wisest idea.

Though any one of the listed options is far cheaper than what the big carriers have to offer, we would recommend a moderate approach and point towards carriers which at the very least combine good prices with decent network coverage and device flexibility, rather than sacrificing several features for just a few dollars less. The single most important quality of your mobile phone is basic functionality, which comes before everything else. So, make sure you choose a solution which provides just that before simply choosing the cheapest cell phone plan.